Montegrappa’s popular Icons Collection of writing instruments pays tribute to global personalities who have achieved greatness in a variety of fields, including music, cinema and sport. Previously released pens in the Icons series have honoured Muhammad Ali, Bruce Lee, Frank Sinatra and Elvis Presley, Ayrton Senna and Pelè. Entering this company of icons is the first woman to be so recognised, the celebrated film star, Sophia Loren.

Sophia Loren is more than a screen legend: she is an Italian screen goddess; her presence in front of the cameras, in more than 90 films, has charmed and entertained audiences for over 60 years. She is one of a disappearing breed of actors: a true star of inimitable talent and presence.

A Brief Look at Sophia Loren’s Illustrious Career in Film

Thanks to her role as Cesira in Vittorio De Sica’s Two Women, Loren’s talents as an actress of great depth were recognised. The performance earned her the Academy Award for Best Actress in 1962 and made her the first artist to win an Oscar for a foreign-language performance. The film was also responsible for her winning the 1961 Cannes Film Festival Best Actress Award and 22 international awards. The awards have continued in a steady procession.

With a name as evocative as “Sophia Loren”, one can anticipate the aesthetic presence of any object which is graced with it. The Sophia Loren™ Pen possesses a sensual form, consummately feminine and Italian. To represent her elegance and womanliness, Montegrappa evokes a scene from the famous movie of 1963, Ieri, Oggi e Domani (Yesterday, Today and Tomorrow), where Sophia is wearing black lace lingerie, teasing her co-star Marcello Mastroianni. Details that underline this include the elegant flower motif engraved on the pen.

It is reminiscent of “lace,” a material loved by the actress, and which has become with the passage of time a symbolic part of her image. A semi-precious gem on the cap top for the silver model, and a pavé of diamonds for the exclusive gold editions add a touch of glamour, while the voluptuous signature pocket clip makes reference to those famous curves. Its resin cap and body presented in three colour combinations: all-Red or Black & Red for the Sterling Silver model, Black & Ivory White for the 18k Rose Gold model. The actress’ signature graces the tip of each pen. The silver version is offered as Fountain, Rollerball and Ballpoint pens. The solid 18k gold pen edition comprises Fountain and Rollerball. For the fountain pens, the 18K gold nibs are enriched with an artist’s rendering of Sophia’s face.

The Story of Montegrappa

A Brief Look at the History of Montegrappa

Montegrappa began as a “Manifattura pennini d’oro e penne stilografiche” (“Manufacturer of gold nibs and fountain pens”) their company located in Bassano del Grappa, Italy. Originally the company was known as ELMO, made up of a pool of local talents, a workforce focused on the production of finely crafted objects, with style, with panache and with a drive to achieve excellence.

As the company blossomed, it enjoyed a golden era now appreciated for the elegance of the manufacture of fine goods. The products of the house met the taste of the public of the time with graceful designs, enhanced and personalised through the variety of their colours and materials. Montegrappa became synonomous with power and position. Boris Yeltsin gave his Dragon pen to Vladimir Putin on 2nd January 2000, and with this pen he symbolically handed over his power to him.

As the company continued on its path, Montegrappa was acquired in 2001 by the Richemont Group, one of the great world leaders in the field of luxury goods. The brand operated initially under the aegis of Cartier, eventually being controlled by Montblanc. In a powerful move, the Aquila family reacquired Montegrappa in 2009. Building on its theme of powerful, iconic individuals France’s President, Nicolas Sarkozy, joins the gathering of incredible personalities who have been proud owners of Montegrappa pens, including Vladimir Putin, Silvio Berlusconi, His Holiness John Paul II, His Majesty King Juan Carlos of Spain, His Majesty King Hussein of Jordan, Her Majesty Queen Sirikit of Thailand, His Majesty Sultan Hassanal Bolkiah of Brunei, Sylvester Stallone, Antonio Banderas, Quincy Jones, Jean Alesi, Michael Schumacher, Jean Todt, Stirling Moss, Zinedine Zidane, Edgar Davids, Naomi Campbell, Paulo Coelho and countless others. For more information, visit www.montegrappa.com

Traveling Through Books
News of the Concours d’Elégance Suisse 2018
EAT LOVE SAVOR LOVES... Jeanne Chavany
The Grand Central Hotel, Belfast Boasts a Fabulous Range Of Dining Options With Executive Head Chef,...
Discover: The Ritz-Carlton Doha
A Distillation of Blohm + Voss Yachts
On-Demand Helicopter Service Arrives at Blantyre in The Berkshires
Cruising across the Eastern Mediterranean - Your guide to skipping the crowds on a luxury yacht char...
Share this: 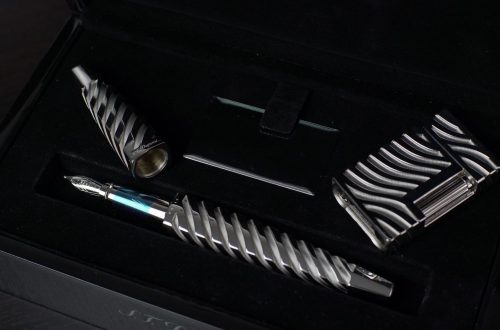