Thomas Prescher Haute Horlogerie is known for its luxury hand and tailor-made watches for watch aficionados and connoisseurs all over the world since 2002.

The timepieces created by Thomas Prescher are manufactured using knowledge of the ancient art of watchmaking by hand – hand-made watches made to the very highest standards and their finish is among the best available on the market. Prescher interprets the art of watchmaking as excellent design, the finest materials, and perfect processing. Each timepiece is made to the specifications of the client. The skilled perfectionism of the watchmaker is the ultimate guarantee that every timepiece coming from the house Thomas Prescher is incomparably and unique, absolute perfection.

From Military to Magnificent: A Masterful Watchmaker is Born

Born in Germany, with a background in the German Federal-Navy as Naval officer, during this time he studied electrical engineering while attending the Navy University in Hamburg, Germany. Following his time in the Navy ending in 1991, Prescher apprenticed at IWC in Schaffhausen, Switzerland until 1994 and graduated as a certified watchmaker and rhabilleur, having finished his apprenticeship a year earlier than the typical completion time. At graduation, he was awarded by the government Kanton Schaffhausen, Switzerland and the association of Suisse-German watch-manufacturers. In 1996 Prescher became a certified master watchmaker, Karl-Geitz-Schule Frankfurt am Main, Germany. He took his knowledge and applied it working in the service department at Audemars Piguet and later at Gübelin Luzern Switzerland. It was at Gübelin, where he did the first complicated watches and several restorations of antique high end complicated watches. From there, he joined Blancpain SA, sitting on the board of directors and acted manager of production. In 2002 he founded his own watchmaking company and is now developing his own technical marvels. His passion and fascination lies with Tourbillons which, he masterfully creates for clients around the world.

WHAT SPARKED YOUR PASSION FOR TIMEPIECES?

I think all started during my high school time. At the age of 12 I became interested in collecting minerals. But living in a small village on the flat land of north Germany it was difficult to follow up my interest and so I was more or less automatically guided to cooperate with one of the local goldsmiths. Being on the high school these days meant that the afternoon was reserved for personal studies at home. I made my own preferences and decided to work for free for the goldsmith every first part of the afternoon and did my homework in the evening. There I came in contact with the watchmaker working at the bench next to me. My interest grew more and more. Finally I decided that becoming watchmaker was my greatest wish. It was not possible to go the straight way for this wish, but I never forgot the target.

WHAT DO YOU WISH MORE COLLECTORS KNEW ABOUT YOUR TIMEPIECES?

Each collector has his own preferences and things he wants. My watches are not only timepieces; a watch for me is art. For me they are a bit what the linen is for the painter. I try to express myself and I use the watch as a platform to transmit this self – understanding. Each of my watches is individual and can be ordered to the personal wishes of the new owner. Owners of my art left the stadium to buy standard brand products. They found the path to themselves and their own taste. So their life is accompanied by bespoken products.

My wish would be that more collectors take their chance to discuss. Only then they will have the incredible feeling to dive into materials, techniques and design. Perhaps accompanied by an invented story like the Nemo creation process was. The final result will be the realization of a dream.

WHAT WAS IT THAT MADE YOU WANT TO SPECIALIZE IN COMPLICATED WATCHES?

Within the entire apprenticeship time the fertile combination of talent and ambition brought me good progress. I was able to shorten the time from four to three years. But even then it was quickly clear that I will finish the studies around six weeks early. While being extremely interested in tourbillons I got in contact with one of the IWC developers, after several discussions he was willing to give an own development for a tourbillon. So it became possible for me as an apprentice to make my own tourbillon. Since then Tourbillons and other complication did not let me go. I am somehow driven to make complicated things look simple. I am fascinated by simple Aesthetic covering technique. So my watches carry a philosophic contrast itself, too. 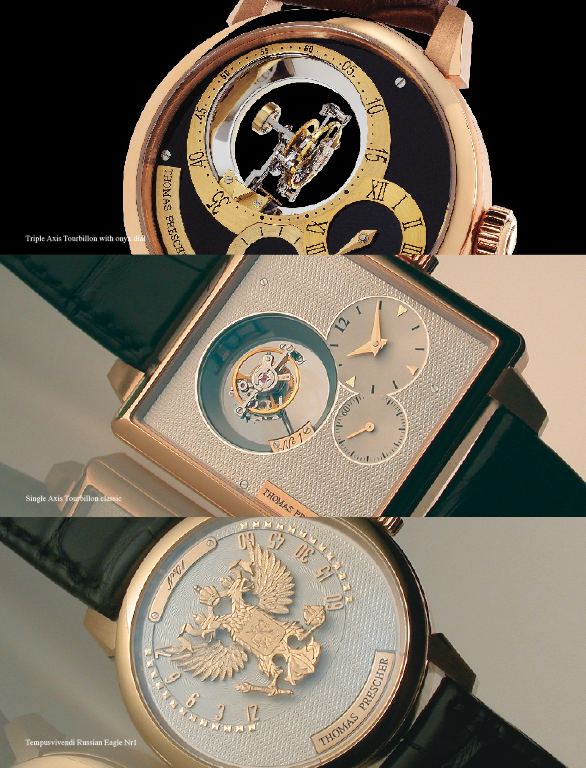 TELL US ABOUT YOUR LATEST CREATIONS AND WHAT INSPIRED THEM

It was the wish of many fans who wanted to know about inspiration, creativity, creation and workflow. So my idea was to let the public be with me during the entire process. After reading Jules Verne’s “20’000 Thousand Leagues Under the Sea” again, the idea was born. It inspired me to continue the story of Captain Nemo. The “Nemo Triptychron” is influenced by the Verne story itself but also by different steam punk and art nouveau items. To create this marvel I dove into a cosmos of images and stories of the 19th century. Surrounded by this collection of material and topics I wrote a fantastic story around all the things I found and published it every few days like a diary about a new sensational archeological discovery.

A lot of attention was paid to this new way of letting the public participate in the creative process. It was clearly indicated that the story was invented but many readers were so fascinated that they have taken it for real. So the entire project became a fabulous success. The “Nemo Triptychron” story will be continued. The last highlight was the presentation of the “Nemo Captain”, the captains watch. Within the next weeks we will see what the idea of his officers were about watches.

WHAT DO YOU SEE LIES IN THE FUTURE FOR FINE TIMEPIECES?

We will have a polarization. Many clients insist in classic forms of watches. I think there will be always a market for these as they transmit constancy. The other way can be seen already. Companies are picking up and continuing the ideas of independent and creative watchmakers trying to follow trends and hypes. I think there is a good market for these watches, too. Clients get interesting watches for a relatively reasonable price. But these products will never have the status of a watch made by the master himself. It is a bit like in Haute Couture. There is a big difference in designed by and made by. These products are reserved for the connoisseurs and aficionados who have left the brands world and follow small more sophisticated paths.