Metamorphosis, the promise of a Renaissance – Chapter II

For the occasion, van Herpen has playfully interpreted the concept of metamorphosis as embodied by the iconic champagne. She has designed a mesmerizing über-premium creation called ‘Cocoonase’, inspired by the importance of time in crafting Dom Pérignon. The Metamorphosis by Iris van Herpen is surprisingly alive, an act of energy.

A bottle of Dom Pérignon Vintage 2004 lays horizontally in the ‘Cocoonase’, taking its place as if it has been growing there for centuries, yet at the same time projecting itself into the future and its next transformation.

[pullquote]The champagne Dom Pérignon has absolute faith in the Power of Creation, the very source and principle of its inspiration. Each vintage is an act of creation by its Chef de Cave.[/pullquote]The disappearance of Dom Pérignon Vintage 2004 must be celebrated, as it foretells a rebirth in the form of its Second Plénitude as P2-2004, following several extra years of elaboration in the cellars. To exalt Vintage 2004’s metamorphosis, Dom Pérignon has evoked anew its Power of Creation.

The Dom Pérignon brand shares the Power of Creation with certain contemporary creators that push the boundaries of their art, exploring virgin territory and reinventing the language of their discipline without betraying it. Dom Pérignon is guided by this Power of Creation, inspiring creation both within itself and among the greatest creators in the world. There are numerous creative collaborations that have been inspired by the powerful and universal inspiration that emanates from the Dom Pérignon vintages: including limited editions with Jeff Koons and David Lynch, a collection designed with Marc Newson, an homage to Andy Warhol, a collaboration with Karl Lagerfeld and creative projects with Robert Wilson, Lang Lang and Alexandre Desplat.

Building upon the collaboration with Iris van Herpen, renowned creative visionary Daniel Sannwald has bestowed his aura to the limited edition Metamorphosis in an artistically daring digital video, with opulent photography. 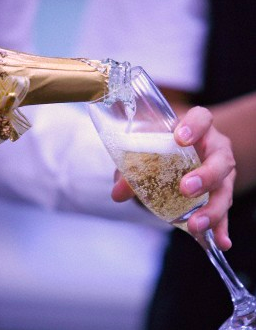 A Little About Champagne: Bottled Icons of Luxury